Tonight's Menu
Oh y'all, we are SO SICK of leftovers. The turkey and most of the side dishes are gone, but the ham! It lingers! I decided we needed a break so tonight I made some frozen popcorn shrimp -- the kind you bake in the oven -- and a fresh salad.

The potatoes were my usual tiny red potatoes, parboiled then chuffed up in a hot pan with butter, except that I tossed a couple of mashed garlic cloves in with them at the chuffing stage. SO yummy, though you have to be careful not to burn the garlic.

I dunno why but for me shrimp, especially breaded shrimp, REQUIRE(S) garlic. They just go together. I would have done garlic bread but we didn't have any nice loaves hanging around. They all went into the stuffing, I think!
Posted by Badger at 7:15 PM 3 comments:

Today's Menu
I am SO STUFFED, y'all.

Okay, Mom made the turkey, dressing, gravy, pecan pie and German chocolate cake so I don't have recipes for those.

[UPDATE! After the tryptophan fog lifted, I remembered Mom said she got the cornbread dressing recipe from Semi-Homemade Cooking with Sandra Lee. Et voila! Mom made a few substitutions, though: veggie broth instead of chicken, and celery instead of water chestnuts. It was SO FREAKIN' AWESOME.]

I made the ham, which was just a honey-cured boneless spiral-cut ham from HEB that needed to be heated for an hour. The rolls were Rhodes frozen rolls (they're little frozen balls of dough that have to thaw and rise before baking), the mashed potatoes were Ore-Ida frozen (they are AWESOME), the cranberry sauce was canned (I added some freshly grated orange zest to the whole-berry sauce and it made a ton of difference), the pickles were from a jar, the pumpkin pie was from the recipe on the Libby's canned pumpkin label, and the birthday cake was from a mix.

I used Emmitt Smith's sweet potato casserole recipe. This is the second year I've made it and it's SO GOOD. I can't make any other recipe now. Props to Emmitt!

The caramelized brussels sprouts were new to me this year. I followed this recipe from Allrecipes.com except that I cut the sprouts in half before steaming, omitted the onion and used toasted almond slivers in place of pistachios. It was DELICIOUS. I will definitely make this again!

I made the green beans the way I always do: chop up some bacon and saute in a Dutch oven until nearly crisp, toss in some chopped onion and saute until the onion releases its fragrance, then add fresh green beans and cover with water. Toss about a tablespoon or so of brown sugar into the water (trust me) and bring the whole thing to a boil, then cover and simmer until the beans are as tender as you like. Drain and serve. Yum!

I seriously will not have to cook for at least two weeks thanks to all the leftovers. Which is good because I don't plan to eat anything for days. Oy.
Posted by Badger at 7:20 PM 3 comments:

This one's for you, Kristen

Tonight's Menu
It's been brought to my attention that I've been neglecting the ol' blog lately. Which is totally true, and I have no excuse except that I don't like to admit publicly how often we eat frozen pizza and hotdogs and crappe like that. So here you go; this is what we had tonight. I made the pork chops the same way as usual except I used Cream of Mushroom Soup With Roasted Garlic. Fancy!

It's finally cool enough outside for this meal to make sense, too. And it makes the house smell SO GOOD.
Posted by Badger at 6:42 PM 1 comment:

Tonight's Menu
I know! Again with the grilling! And the beef*! I can't help myself!

I make my baked beans the way my mom always did. You start with canned Campbell's pork and beans. Partially drain them and dump them into a baking dish. Then chop up some bacon and onions, fry them up in a skillet, and add that to the beans. Then add equal parts brown sugar and ketchup, a little squirt of prepared yellow mustard, and bake them in the oven for an hour or so (I've cooked them on any temp from 300 to 400, depending on how quickly I need them done).

It ain't fancy, but it's goooooood.

*Yes, we eat a lot of beef and pork. DH and the girl are allergic to soy and some tree nuts and DH is also allergic to poultry. Our protein options are limited over here. If that bothers you, you might want to read a different blog.

It's what's for dinner

Tonight's Menu
Yes, I am STILL GRILLING. And it's NOVEMBER! But I'm grilling in the dark, which makes it not seem so wrong somehow. It's like camping! But I get to sleep in a comfy bed with no bugs! And a real toilet!

So yeah, I bought some nice thick NY strip steaks this week. Now that the kids like meat (or the boy does, at least) I've been buying the family packs for cheap. I brought these to room temperature, rubbed them with crushed garlic cloves, sprinkled with kosher salt & cracked pepper, then cooked them on an insanely hot gas grill for 4 minutes per side. After resting they were medium rare, tender and perfect.

The mushrooms and onions were sauteed in EVOO and seasoned with a bit of salt and pepper. Baked potatoes were loaded with all the bad dairy products and whatnot. Broccoli was steamed in the microwave.

OH! And also I made an apple crumb pie for dessert! From scratch! Well, except for the crust. Those Pillsbury refrigerated crusts are just too damn easy.

So yeah, tonight's dinner was WAY yummy. Especially with a little pinot.
Posted by Badger at 8:16 PM 1 comment:

Tonight's Menu
Yes, I know it's been forever since I posted. We've been eating crap.

However, tonight's dinner was WAY yummy, the only minus being that it was supposed to be YESTERDAY'S dinner. But yesterday, everything went horribly wrong.

Here's what happened: my pal Joke posted a recipe for his grandmother's Italian version of ropa vieja (christened ropa vecchia because of the Italian thing). Bec tried it and posted some photos that had me wiping drool off my keyboard, so I decided I had to try it, too.

Here's what I did wrong-ish:
So, by dinnertime last night I had a hunk of shrunken, greyish, not at all tender meat and that was not good, not good at all. We had leftover spaghetti instead.

I don't usually post pictures on this blog, but I went to so damn much trouble for this meal that you bet your ASS I took a picture. 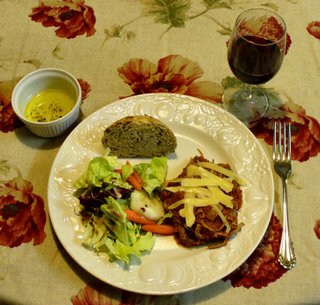 Drop me a line

How it all began